A humidifier could help ward off COVID-19, but don’t overdo it

Pam Dalton, a scientist who studies the nose, including mucus, stands outside the Monell Chemical Senses Center, in front of the sculpture "Face Fragment,” by Philadelphia sculptor Arlene Love.

In a building crammed with mass spectrometers, gene sequencers, and other sophisticated equipment for studying the science of smell, Pam Dalton uses a low-tech approach to maintain her nasal health.

Three bowls of water on top of the heating vent in her office.

Dalton, a longtime researcher at the Monell Chemical Senses Center in West Philadelphia, knows the nose is a fantastic filter for viruses and other foreign particles. But it does not work as well when the air is dry — a drawback that infectious-disease experts say could explain some of the recent surge in COVID-19.

We’re told to wear masks, to keep our distance from others, and when indoors, to opt for spaces that are well ventilated. Now, with the onset of dry, wintry weather and heaters running full blast, add another strategy to reduce the risk of transmission: humidification.

One option is to use a humidifier, but be careful not to overdo it, said Robert T. Sataloff, chair of the department of otolaryngology at the Drexel University College of Medicine. Too much humidity, along with a failure to keep the units clean, can lead to a different health problem: the growth of mold.

“It’s not as easy as going out and buying a humidifier, turning it on and forgetting about it,” he said.

Other ways to keep the nasal passages moist include drinking plenty of water, or boiling a pot of water on the stove several times a day and inhaling the steam for a few minutes, he said. (But don’t get too close.)

Olfactory scientist Pam Dalton keeps bowls of water in her office to "passively" humidify the air, keeping her nasal passages moist so they are better able to filter viruses. 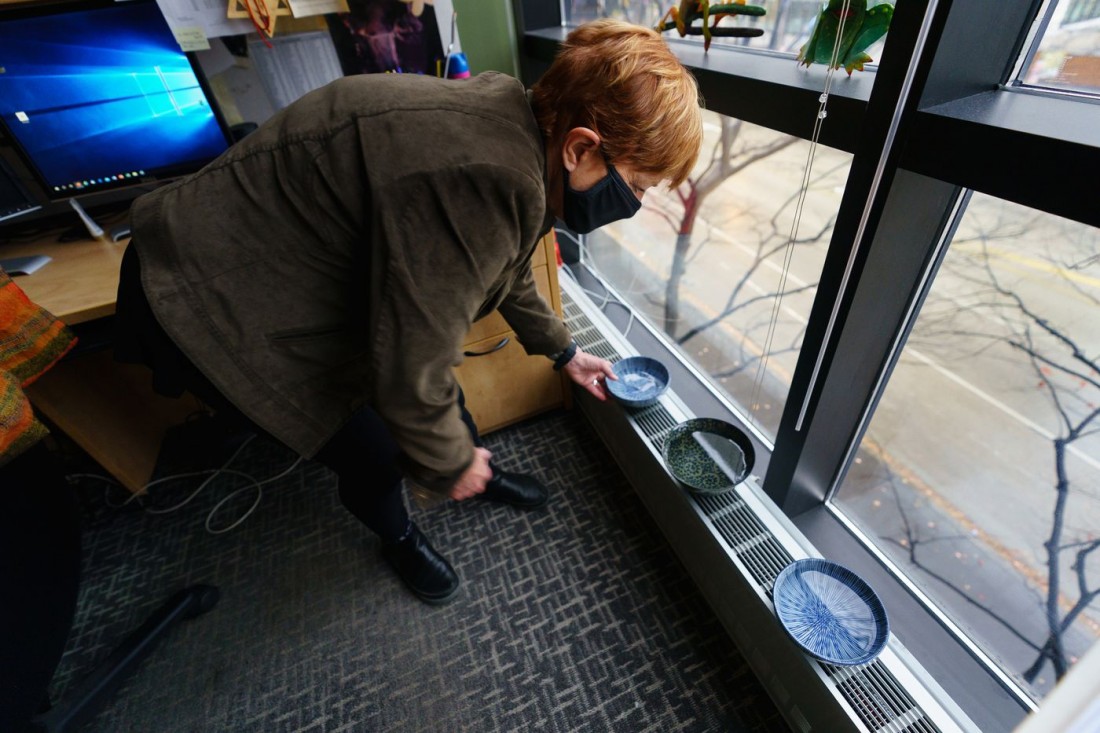 In her office overlooking Market Street, Dalton’s bowls of water provide passive humidification, which she can perceive with her nose as well as her eyes. On a cold, dry day in winter, when the heater is working overtime, the water levels in the bowls drop as much as half an inch, she said.

The reason moisture helps the nose filter viruses has to do with what lines its insides: tiny hair cells (called cilia) and mucus. These are not the kind of nose hairs you can see, but their microscopic cousins, which “beat” in a pulse-like fashion, carrying mucus toward the back of the nose to the throat.

It’s the first line of defense in the immune system. A human being swallows close to a quart of mucus every day, carrying countless viruses to the stomach where they are safely dissolved in acid.

Yet in a dry environment, mucus becomes thicker and the hairs are less able to move. Viruses can sail past this protective lining and penetrate cells deep in the airways, Dalton and Sataloff said.

Scientists have not directly studied how dry air hampers the nose’s ability to filter the coronavirus, as it would be unethical to test a deadly virus in humans. But the evidence from studies of other airborne viruses and foreign particles is clear.

In 2019, the lab of Yale University immunologist Akiko Iwasaki captured this phenomenon on video. Scientists filmed the inside of the trachea (windpipe) in two groups of mice: one that had spent a week in air with 50% relative humidity, the other at 10% humidity.

Like the nose, the trachea is lined with mucus and cilia, and the videos revealed that in dry air, this filtration system cleared particle-laden mucus much more slowly, Iwasaki and her colleagues reported in Proceedings of the National Academy of Sciences. The animals at 10% humidity also were less able to repair damaged cells in their airways, and they were more susceptible to the flu.

Particles travel more quickly through the windpipes of mice at 50% relative humidity (right) compared to those at 10%.

In an article she cowrote for the Washington Post, Iwasaki recommended that people try to maintain relative humidity in the 40%-to-60% range.

At Monell, Dalton tracks the speed of mucus clearance in humans with a more low-tech method: pellets of saccharine. Using forceps, she places a pellet of the artificial sweetener at the back of the nose, on the bed of the nasal cavity, then measures how long it takes the person to taste it.

In moist air, a particle travels within a minute or two to the back of the throat, where it can be tasted. Dry conditions make the process take longer, by thickening the mucus.

“If it’s too thick, the cilia can’t move it,” she said. “It just sits there.”  Cigarette smoking also impairs the speed of this “mucociliary” clearance, as does the inhalation of other irritants. When Dalton tested first responders who had been exposed to the dust cloud from the 2001 destruction of the World Trade Center, some could not taste the saccharine for more than half an hour.

High altitude also can impair this clearance function, as thinner air holds less moisture. Dalton measured this effect a decade ago on a hiking vacation in the Himalayas, bringing along forceps and a light scope to peer inside the nostrils of willing participants. But the noses of her group’s guides, who were natives of Nepal, performed better than those of her fellow tourists.

“They seemed to have adapted to the point where everything seemed to be working more efficiently than in us lowlanders,” she said. “There I was at 17,000 feet above sea level, placing saccharine particles in people’s noses.”

Sataloff, the Drexel physician, also is keenly aware of the risks of dryness in a non-laboratory setting.

A trained vocalist who conducts the Thomas Jefferson University choir, he and his fellow singers know that poor hydration not only hampers the immune system, but also reduces lubrication for the vocal cords.

“You can spot singers from the bottles of water coming out of their backpacks,” he said.

As for how much water to drink, don’t worry too much about that oft-repeated advice to consume eight glasses per day, he said. The right amount varies depending on body size, activity level, and air temperature, among other factors. Most people can tell if they are getting enough fluids simply by whether they feel thirsty.

In older people, however, the sensation of thirst may be impaired. A better indicator is to watch what happens in the bathroom, Sataloff said.

In addition to drying out the nose, cold weather can lead to more cases of COVID-19 in other ways. More activities take place indoors, where there is less fresh air and people cluster together, potentially spreading infection. And evidence suggests the actual virus particles fare better in cooler, drier temperatures.

As with so much else in the pandemic, multiple factors are at work. No one layer of protection is foolproof. But increasing hydration and humidity can help.

Your nose, Dalton and Sataloff say, will thank you.